Teeth, Teething and Chewing in Puppies

My puppy has started biting my hands, my legs, my children's legs - pretty much any object he can get his mouth on. What is going on? 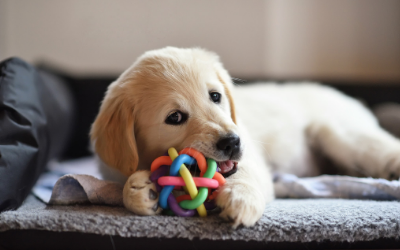 Your puppy is teething, the same way that human babies and children grow new teeth during their development. Like a human, your pup first grows a set of baby teeth (also called primary or deciduous, meaning they fall out). These teeth are pointed and sharp, which is why they are sometimes referred to as needle teeth.

Dogs have 28 deciduous teeth and end up with 42 permanent teeth. You may find deciduous on the floor, but more likely, your puppy will harmlessly swallow the teeth while he is eating. It is not unusual for some bleeding to occur when the teeth fall or are falling out, but the amount is minuscule and owners usually notice it only if there is some mild red staining on a chew toy.

Why is everything being attacked?

Puppies will chew on people, furniture, and other objects (including ones you value) that are within their reach; this is part of normal puppy behavior. Dogs learn much about the world around them through how things feel, and a dog's main means of touching and grabbing things is with its mouth.

This tendency is particularly pronounced in breeds known to be "mouthy," such as retrievers. Chewing also seems to alleviate what is assumed to be discomfort associated with the teething process.

When will my dog's baby teeth fall out?

Are there any common dental problems in young dogs?

Problems with deciduous teeth are few and far between. It is rare that a pup will have a dental problem that is serious enough to require advanced intervention or referral to a veterinary dentist. Some breeds, particularly smaller breeds and brachycephalic (short-nosed) breeds, have a tendency to retain some of their deciduous teeth. The most usual site is the upper canine teeth, although it can happen anywhere. Retained deciduous teeth can cause malocclusion (misaligned teeth leading to a poor bite) and discomfort. They also predispose dogs to future dental problems. Food can get trapped between the retained deciduous teeth, the permanent teeth, and the gingiva (gums), which can lead to periodontal (dental) disease. Retained deciduous teeth need to be removed. Usually a simple procedure, it is commonly performed at the time of the pet's neutering or spaying.

What are acceptable chew toys, and which ones should be avoided?

Because dogs tend to chew nearly everything, nearly everything has been found to cause problems. This goes for rawhides, pigs' ears, or other parts of animals given to dogs to chew (some owners swear by the "bully stick," which is the dried or cooked amputated penis of a bull), bones, synthetic toys, tennis balls, etc. Some of these objects have caused gastrointestinal blockages or intestinal punctures, which often require surgery and can be life-threatening; others have blocked the throat, causing dogs to asphyxiate.

Notwithstanding these facts, consider that millions of dogs have been chewing millions of objects for years, most without incident. So while the risk does appear to be low, as with most activities, it cannot be eliminated. Watch your puppy when he begins chewing, and talk to your veterinarian about which chew toys are the safest for your puppy. It is important to supervise your puppy even when he is chewing on recommended toys as no toy is 100% safe.

"It is important to supervise your puppy even when he is chewing on recommended toys as no toy is 100% safe."

Bear in mind that some objects that are safe from the point of view of ingestion or inhalation, may still not be very good for your dog's teeth. Most veterinary dentists recommend against allowing puppies and older dogs to chew anything hard. That would include objects made of nylon, as well as bones and antlers. Veterinary dentists often sum up this recommendation with, "Don't let your dog chew anything that won't bend."

What should I do about my puppy's chewing behaviors that I don't like?

Do not reward behavior you do not want, and do not let others reward it either. If your puppy is chewing on your hands or any other body part, yelp a high pitched shriek like a puppy makes, pull your hand away, and go play elsewhere.

"Do not reward behavior you do not want, and do not let others reward it either."

There is no consensus about the best way to teach puppies not to chew. Some methods may even seem contradictory because what may work for one dog may be inappropriate for another. Check with your veterinarian for a personalized recommendation.

Puppies are naturally energetic and curious, so try to redirect that energy elsewhere by including lots of exercise, training, and try feeding from puzzle toys rather than a bowl. Do not leave tempting items like clothes, shoes, or children’s toys where your puppy can reach them. At the same time provide lots of safe chew toys. Keep chew toys “fresh” by rotating them, only having a few out at any one time. Supervise your puppy so he does not have the opportunity to chew something he shouldn’t.

My children like playing rough with the puppy, and they say that they don't mind the occasional scratch or gentle bite. Is this okay?

No! Permitting this behavior teaches your pet that hands are acceptable toys to use as he or she pleases. Your dog is not only learning that it is okay, but the pup is even being rewarded for this behavior when your children continue playing after being bitten or scratched.

Will my dog ever stop chewing everything?

Excessive chewing behavior seems to subside around 18 months of age but will continue to some degree, depending on the dog, for his or her whole life. Remember that chewing, licking, and mouthing are normal behaviors for dogs as a way of exploring and learning, and carrying objects from one place to the next. If chewing is excessive or aggressive, consult your veterinarian for behavior modification advice.

Should I brush my dog's teeth?

Getting your puppy used to having something in his or her mouth other than food or a chew toy is a good idea. You also want to be able to retrieve objects from your dog's mouth or look in there without risk of injury to your hand. In addition, because dental problems are among the most common (and costly) problems seen in dogs, getting your dog to tolerate brushing at an early age will get you started on a path that will help prevent many of these problems.

Buy a toothbrush and toothpaste suitable for dogs (human toothpaste is not appropriate for dogs and can make them sick). Start by just gently introducing the brush and paste, allowing your pup to sniff and lick the brush. However, do not force the matter. Ask your veterinarian to demonstrate brushing a technique and give you advice for getting your dog used to the routine. Most dogs can be taught to tolerate or even enjoy daily teeth brushing. For more information, see the handout "Brushing Your Dog's Teeth".

© Copyright 2020 LifeLearn Inc. Used and/or modified with permission under license.

View All
Ready to make an appointment? Schedule Online